Germany, China and the US have all sent messages of support after the deadly shooting of the former prime minister. Shinzo Abe was Japan’s longest-serving prime minister before leaving office in 2020. 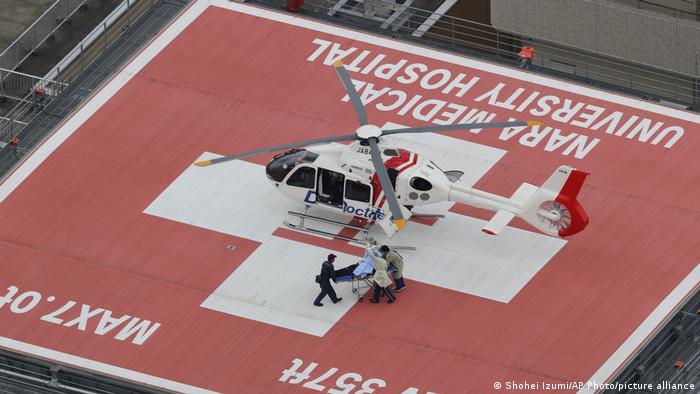 After he was shot, a helicopter took the former Prime Minister to nearby Nara Medical University Hospital

World leaders delivered messages of shock and support over the shooting of former Japanese Prime Minister Shinzo Abe on Friday.

His death was confirmed several hours after the attack by doctors at the hospital where he had been taken.

Abe, 67, held the title of Japan’s longest-serving prime minister and has been a mainstay of politics in the country and on the global level.

“I was praying that his life would be saved, but despite that, I came to learn of [his death]. It is truly regrettable. I am lost for words. I offer my sincere condolences and prayers that his soul may rest in peace,” an emotional Kishida told reporters.

Leaders from around the world expressed their concern over the situation and Abe’s condition on the news that he was in hospital.

German Chancellor Olaf Scholz said the killing of Abe had left him “stunned and deeply sad.” He expressed his condolences for Abe’s family, “my colleague Fumio Kishida and our Japanese friends.”

“We stand closely by Japan’s side even in these difficult hours,” he added.

Germany’s Foreign Minister Annalena Baerbock said that she was “shocked by the news that Shinzo Abe was shot,” before the news of his passing.

“My thoughts are with him and his family,” she wrote on Twitter. Baerbock is currently in Bali, Indonesia, for the G20 summit.

“A wonderful person, great democrat and champion of the multilateral world order has passed away,” she wrote on Twitter. “I mourn with his family, his friends and all the people of Japan.”

US President Joe Biden responded to the news saying, “I am stunned, outraged, and deeply saddened by the news that my friend Abe Shinzo, former Prime Minister of Japan, was shot and killed while campaigning.”

“This is a tragedy for Japan and for all who knew him,” Biden said in a statement. He also ordered US flags to be flown at half-mast until July 10 in honor of the late former leader, and said he would go to the Japanese Embassy in Washington to sign a condolence book.

US Secretary of State Antony Blinken called Abe a “leader of great vision” after his “shocking” and “profoundly disturbing” assassination.

Their messages were mirrored in a tweet from NATO chief Jens Stoltenberg. He later said he was “deeply saddened by the heinous killing.”

“I send my condolences to the bereaved families and Japanese people who have lost the longest-serving prime minister and respected politician in Japan’s constitutional history,” he said.

Ukrainian President Volodymyr Zelenskyy also tweeted his condolences saying, “Horrible news of a brutal assassination of former Prime Minister of Japan Shinzo Abe. I am extending my deepest condolences to his family and the people of Japan at this difficult time. This heinous act of violence has no excuse.”

British Prime Minister Boris Johnson said he was “appalled and saddened” by the “despicable attack.” He later said it was “incredibly sad news” about Abe’s death following the later announcement. “His global leadership through unchartered times will be
remembered by many. My thoughts are with his family, friends and the Japanese people.”

French President Emmanuel Macron said that “Japan has lost a great prime minister, who dedicated his life to his country and worked to ensure order in the world.”

India’s Prime Minister Narendra Modi tweeted that he was “shocked and saddened beyond words at the tragic demise of one of my dearest friends, Shinzo Abe.” He also announced a national day of mourning on July 9, as “a mark of our deepest respect.”

Australian Prime Minister Anthony Albanese tweeted “our thoughts are with his family and the people of Japan at this time.”

“He has supported Taiwan for many years and spared no effort to promote the progress of Taiwan-Japan relations,” she said in a Facebook post.

China also expressed shock over the shooting. Beijing and Tokyo have long had strained relations which were put to the test by Abe’s ultra-nationalism during his time in office.

“Former Prime Minister Abe made contributions towards improving China-Japan relations during his term. We express our condolences on his death and send our sympathies to his family,” the Chinese embassy in Japan said in a statement.

“I am deeply saddened by his sudden passing,” state broadcaster CCTV quoted Xi as saying, also reporting that he and his wife Peng Liyuan had sent a separate message of condolence to Abe’s widow, Akie Abe.

Russia, currently under sanctions from Japan for its invasion of Ukraine, also sent a message of support. Speaking at the G20 summit in Bali, Foreign Minister Sergey Lavrov said he had offered his “condolences” to his Japanese counterpart.

“We are deeply saddened by the news from Japan,” Kremlin spokesperson Dmitry Peskov said after the hospital confirmed Abe’s death. “Abe was truly a patriot of Japan.”

Russian President Vladimir Putin also sent a message to Abe’s family calling his death an “irreplaceable loss.” Putin said the former Japanese prime minister had been an “outstanding statesman” who had boosted “good neighborly ties between our countries.”

Most Viewed The Queen’s funeral