March 23 (Reuters) – U.S. President Joe Biden flies to Europe for an emergency NATO summit on Ukraine, where invading Russian troops are stalled, cities are under bombardment and the besieged port of Mariupol is in flames. read more

* Satellite photographs showed massive destruction in Mariupol, once a city of 400,000 people, with columns of smoke rising from burning residential apartment buildings.

None of the following reports could immediately be verified:

* Russia said its forces used long-range weapons fired from the sea to hit a Ukrainian arms depot outside the northwestern city of Rivne and two Tochka-U missile launchers in an industrial zone in the outskirts of Kyiv. The defence ministry published footage of what it said was eight Kalibr missiles being fired from a warship at Ukraine’s military infrastructure. read more

* Ukrainian officials said that two civilians were killed in overnight shelling in the Mykolaiv region, a bridge was destroyed over the River Desna in Chernihiv and residential buildings and a shopping mall were struck in two districts of Kyiv, wounding at least four people.

* Russia’s combat power in Ukraine has declined below 90 percent of its pre-invasion levels, a senior U.S. defense official said on Tuesday. Russia says its “special military operation” in Ukraine is going to plan. read more

* More than 145,000 babies are in urgent need of nutrition support in Ukraine, UNICEF said. 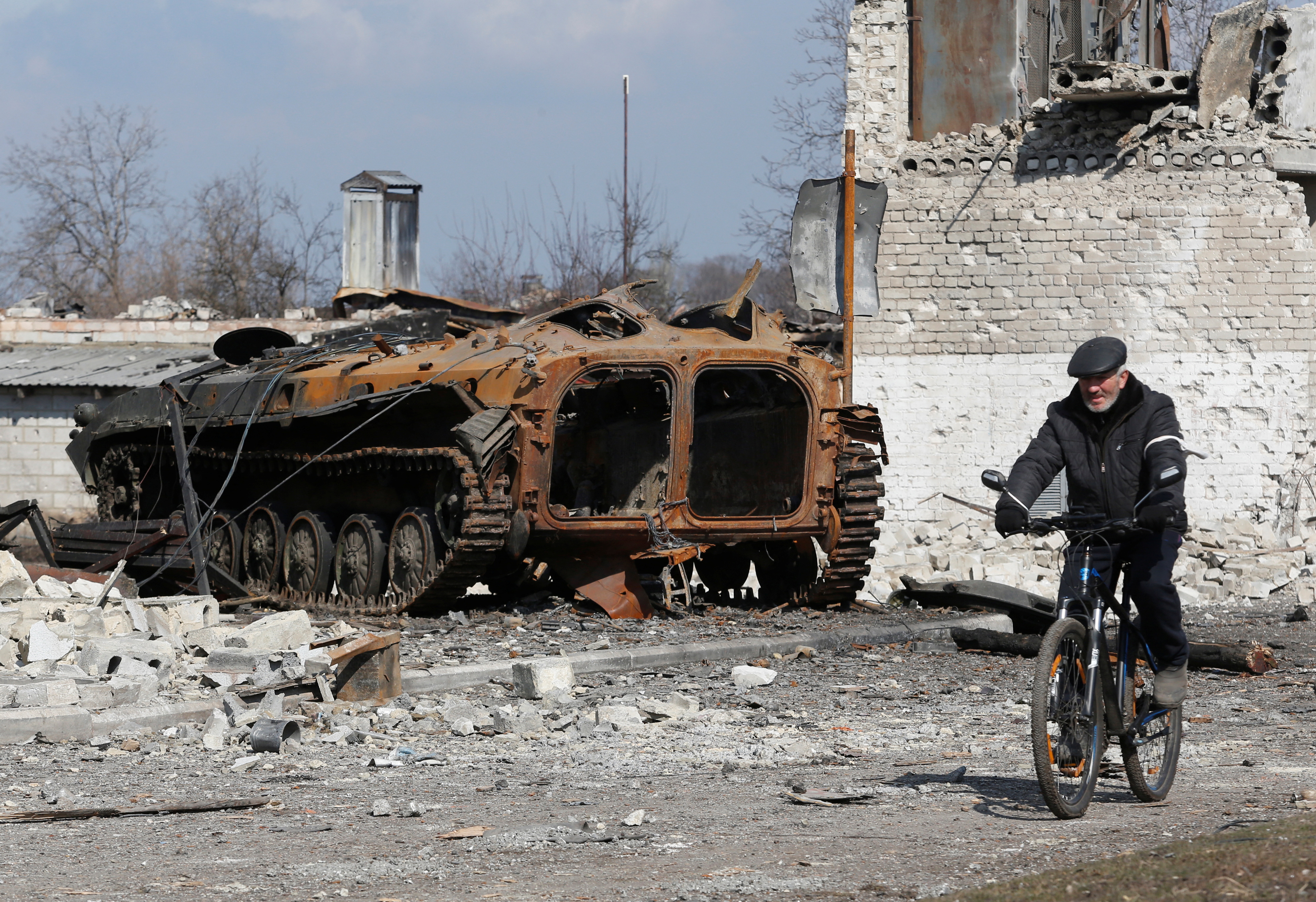 A local resident rides a bicycle past a charred armoured vehicle during Ukraine-Russia conflict in the separatist-controlled town of Volnovakha in the Donetsk region, Ukraine March 15, 2022. REUTERS/Alexander Ermochenko

* The head of the International Committee of Red Cross will raise “pressing humanitarian issues” in Ukraine during ongoing talks in Moscow with senior Russian officials, the agency said. L5N2VQ1YU

* The EU on Wednesday is due to set out plans on how it will provide jobs, education and housing for refugees.

* The Biden administration aims to make it easier for some Ukrainian refugees to come to the United States after only a handful were admitted in the first two weeks of March, according to three people familiar with the matter.

* Biden and his team are developing plans to impose sanctions on members of the Russian parliament, the Duma, two sources familiar with the situation said. The sanctions are expected to be announced on Thursday.

* One of Russian President Vladimir Putin’s closest allies said the world could spiral towards a nuclear dystopia if Washington pressed on with what the Kremlin casts as a long-term plot to destroy Russia.

* “The world is on the verge of many new crises,” Zelenskiy told the Japanese parliament. “The environmental and food challenges are unprecedented.” read more

* “I’m really scared of what’s going to happen next, how it’s going to end,” new mother Tamara Kravchuk said in a maternity ward in Mykolaiv, a southern city that has been subjected to Russian shelling.