WASHINGTON—Just after 2 p.m. Wednesday, senators were in their chamber debating an objection to President-elect Joe Biden’s Electoral College win. One floor below, a mob of President Trump’s supporters, who had been amassing outside since the morning, smashed glass and pushed their way past police to gain entry to the Capitol.

At first it didn’t appear lawmakers were aware of the chaos unfolding during what is typically a ceremonial session to certify the election results. Vice President Mike Pence and two guests looked on from the gallery. Sen. Patrick Leahy of Vermont passed his phone back and forth to some of his Democratic colleagues, and scribbled notes to Sen. Dick Durbin of Illinois, the No. 2 Senate Democrat, in what appeared to be growing concern.

At about 2:10 p.m., a hot mic in the Senate chamber picked up ominous words told to Iowa Sen. Chuck Grassley, the Senate pro-tem.

“The protesters are in the building.”

Soon he and Mr. Pence, who are both in the line of presidential succession, were evacuated from the chamber. Those remaining inside could hear pro-Trump rioters yelling and police screaming back, punctuated by a loud thwacking sound.

Capitol Police surrounded the Senate chamber and sealed it off. An officer holding what appeared to be a semiautomatic weapon stood on the floor between Senate Majority Leader Mitch McConnell (R., Ky.) and Minority Leader Charles E. Schumer (D., N.Y.).

Sen. Chris Coons (D., Del.) said the officer was dressed very casually and carried the weapon in a pink and gray sling that said “police” on it. “He stood right in the middle of the aisle,” he said.

Police told senators to stand away from the doors.

Before long, police evacuated lawmakers from both the Senate and House chambers, a woman was shot and someone set off gas munitions.

In the House chamber, aides piled up furniture to block the doors, while other staff members were told to evacuate their offices, but found they couldn’t leave the buildings safely.

Rioters, dressed in MAGA hats and emboldened by encouragement from the president, swarmed the Capitol as they sought to block the ratification of Mr. Biden’s win.

The violent scene capped the bitterly fought 2020 campaign and the subsequent weeks marked by Mr. Trump’s rejection of his loss despite no evidence of widespread fraud. At a midday rally, Mr. Trump encouraged protesters to march to the Capitol and “take back our country.”

The unidentified woman shot inside the Capitol died, and law enforcement found two apparent explosive devices at the headquarters of both the Republican and Democratic National Committees.

Lawmakers and aides described how a typically uneventful proceeding descended into violent tumult, threatening the session and undermining the democratic process.

“This is the most dismal day for democracy probably since the Civil War,” said Rep. Emanuel Cleaver (D., Mo.), speaking by phone from a secure room. “We are experiencing, unless something happens to turn it around, the decline of the American empire.”

At 1 p.m., the joint session in the House chamber formally gaveled into session as planned, with Mr. Pence, who serves as president of the Senate, standing beside House Speaker Nancy Pelosi. Moments earlier, Mr. Pence’s office released a three-page letter rejecting calls to use his ceremonial role of recording the electoral votes to overturn the election, including from the president.

Lawmakers split into the separate chambers on either side of the Capitol to begin debating the merits of an objection to Arizona’s electoral votes. Outside, protesters tore down barricades, clashed with Capitol Police and made their way to the entrances.

As they continued to debate, some lawmakers and staff began to realize what was happening outside. At about 1:30 p.m., Capitol Police sent alerts asking occupants to evacuate two congressional office buildings.

Rep. Chip Roy, a Texas Republican opposed to overturning the Electoral College result, tweeted at 1:37 p.m. “To those storming the Capitol—I am on the House floor and I will not be deterred from upholding my oath, under God, to the Constitution by mob demand.”

At 1 p.m., the Senate and House of Representatives convene a joint session in the House chamber (1) to ratify President-elect Joe Biden’s Electoral College win. After an objection is raised to Arizona’s electoral votes, the lawmakers split into their separate chambers for debate.

Police escort House Speaker Nancy Pelosi (D., Calif.), second in line for the presidency, out of the House chamber (1). Officers stand with guns drawn as the mob outside bangs on the locked doors. At about 2:45, people inside the chamber hear gunfire.

Before long, both chambers are evacuated and police rush lawmakers, staff and media to secure locations.

Rioters break through barricades and reach the Capitol’s west-side stairs (2), where police spray them with chemical agents. As senators debate the objection (3), rioters push their way into the building.

Rioters wander the halls and Rotunda (4), carrying flags—including at least one Confederate battle flag—and inflicting damage across the complex.

Vice President Mike Pence and Sen. Charles Grassley (R., Iowa)—the Senate’s president pro tempore, so third in the line of succession for the U.S. presidency—are escorted out, and police seal off the Senate chamber (3).

At some point, an unidentified female protester is shot (5) by police; she later dies.

Outside, the first breach of the Capitol barricades came haltingly, as a small but growing group of Trump supporters arrived at the base of Capitol Hill, in the small roundabout that holds the marble Peace Monument.

Though Mr. Trump and his son Eric Trump had called on protesters to march on the Capitol, some marchers initially expressed confusion about where to go.

“I guess this is the place,” one middle-aged man in a brown hooded sweatshirt said. Others began to chant at the nearest figures on the other side of the fence: five helmeted Capitol Police officers who stood across the pathway leading to the building’s West Front edifice.

Minutes later, as the crowd continued to grow, several protesters began to rock the temporary metal barricades that blocked their path. The police resisted, and soon turned and retreated up the hill, other officers running from the north to join them, as the Trump supporters surged through the gateway and up toward the Capitol itself.

On the stairs of the west side of the Capitol, dozens of protesters, some yelling “Take the Capitol!” faced off with police, who sprayed them with chemical agents.

“You’re a traitor to your country,” one man shouted. Others chanted “Pence is a traitor” and “stop the steal.”

The rioters pushed forward and the outnumbered officers retreated, giving way to a flood of protesters who scaled walls and filled balconies outside the Capitol. Several waved pro-Trump flags and signs.

Dozens of Trump supporters climbed scaffolding outside the Capitol that had been erected for the coming inauguration of President-elect Biden.

Soon, they broke into the building.

As the tension grew, Mr. Trump remained focused on his grievances, tweeting: “Mike Pence didn’t have the courage to do what should have been done to protect our Country and our Constitution, giving States a chance to certify a corrected set of facts, not the fraudulent or inaccurate ones which they were asked to previously certify. USA demands the truth!” 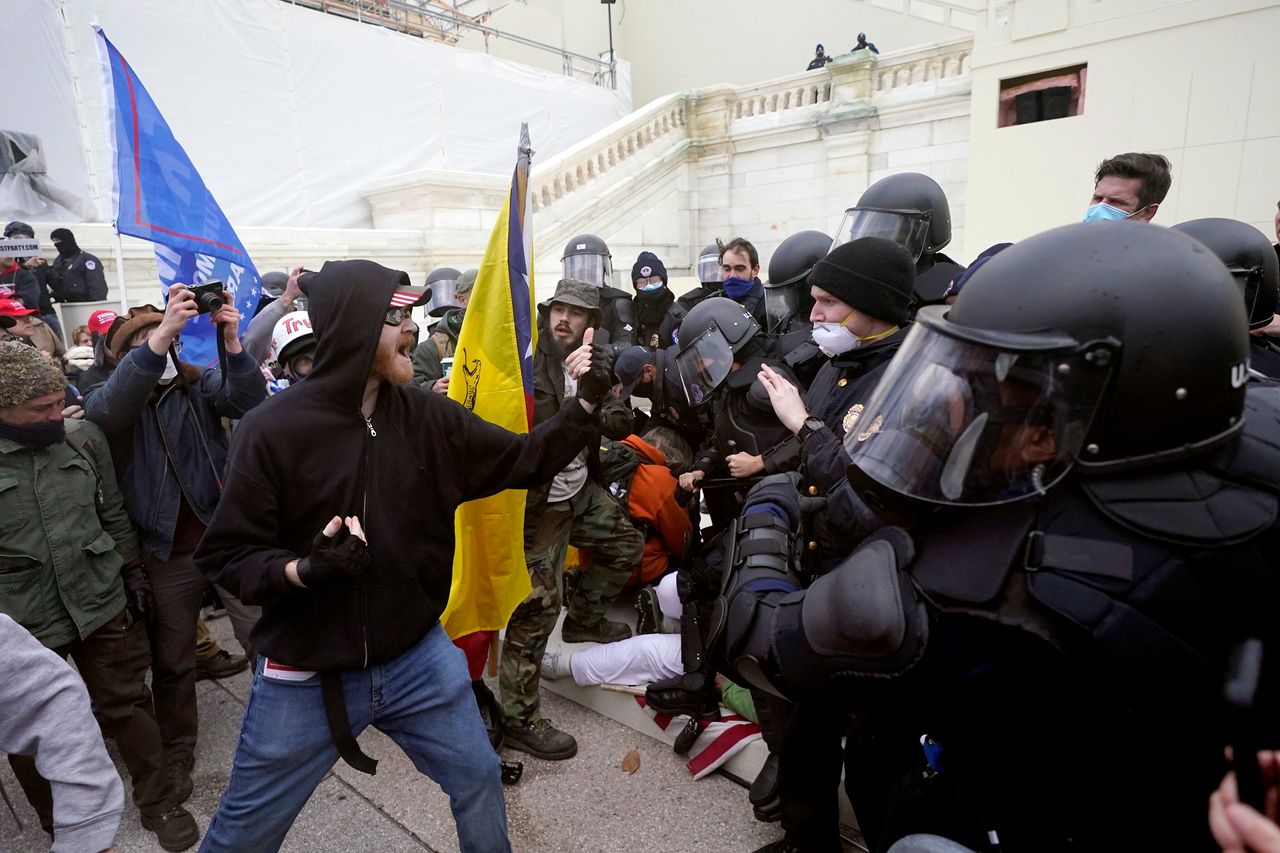 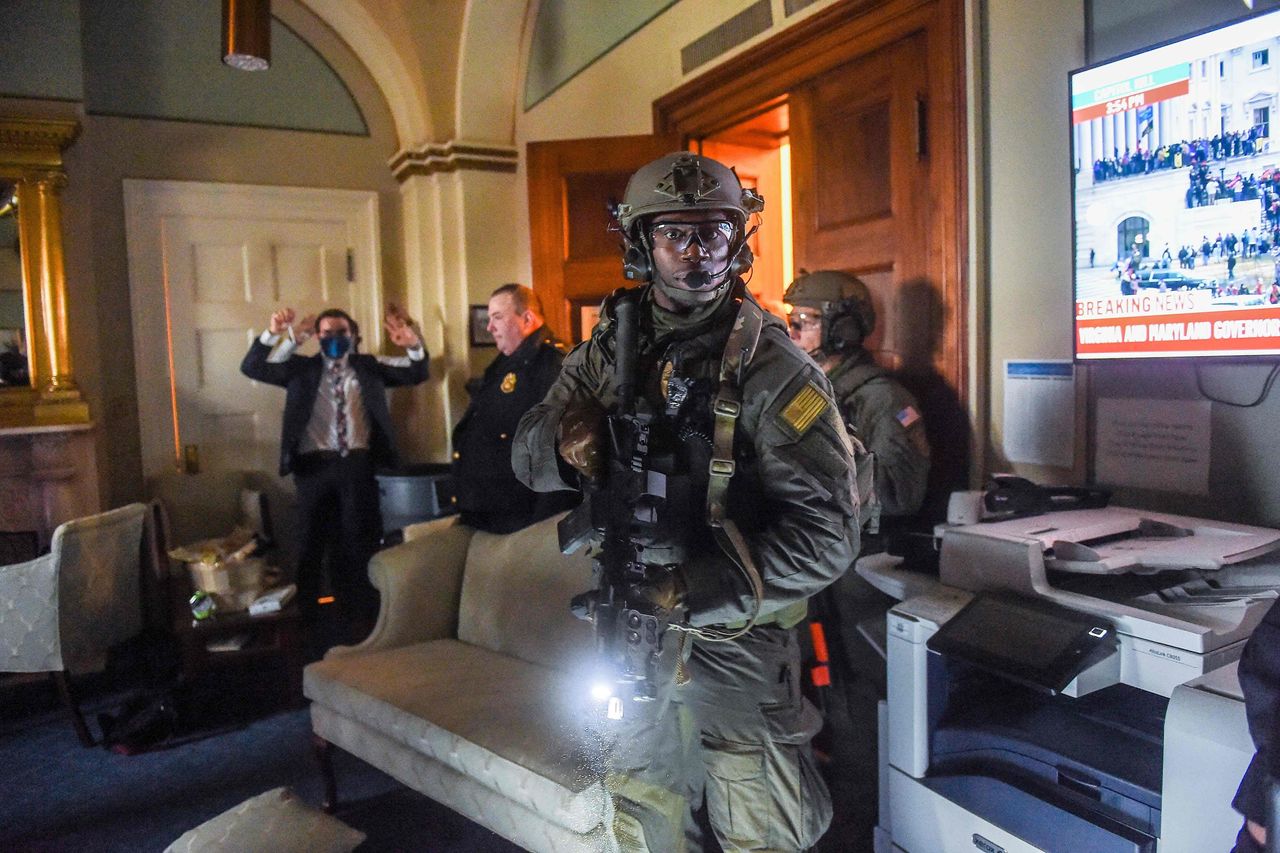 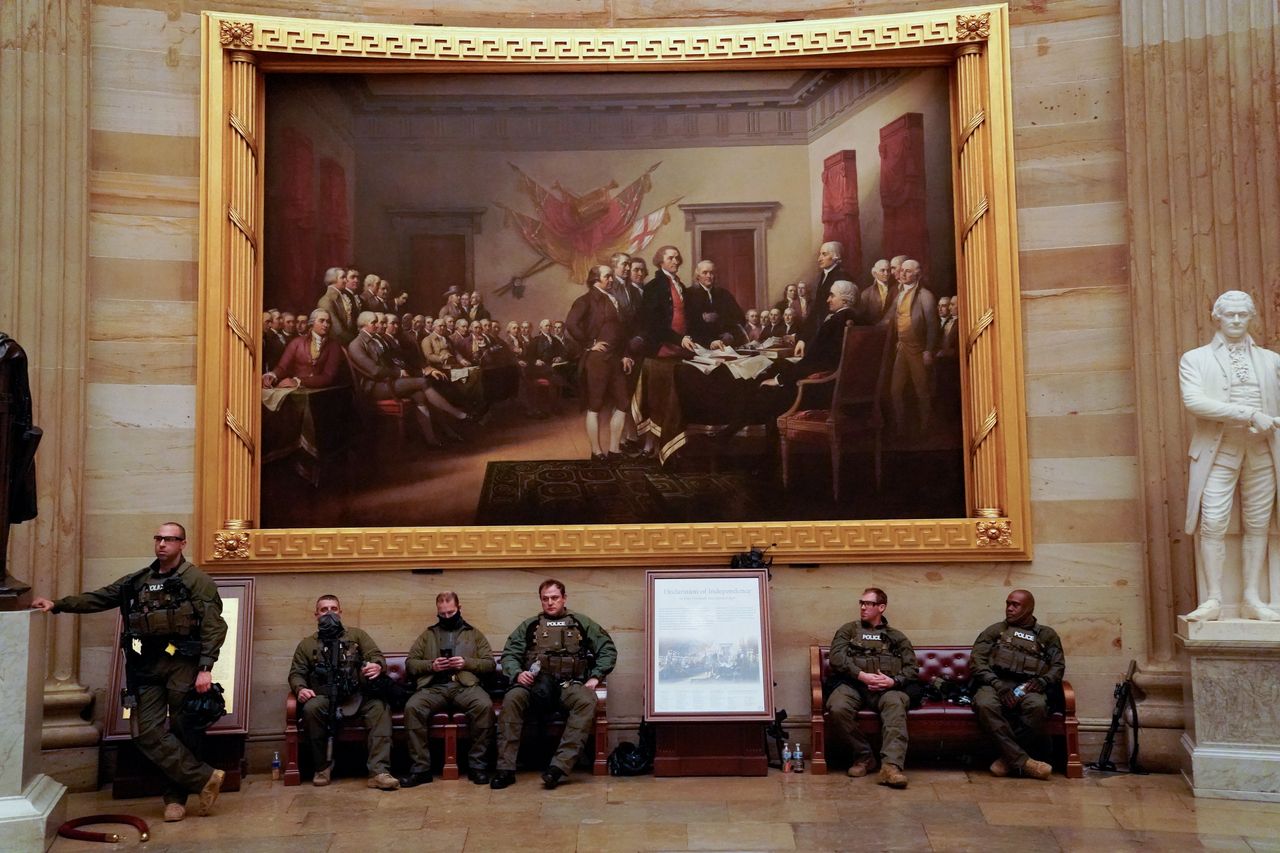 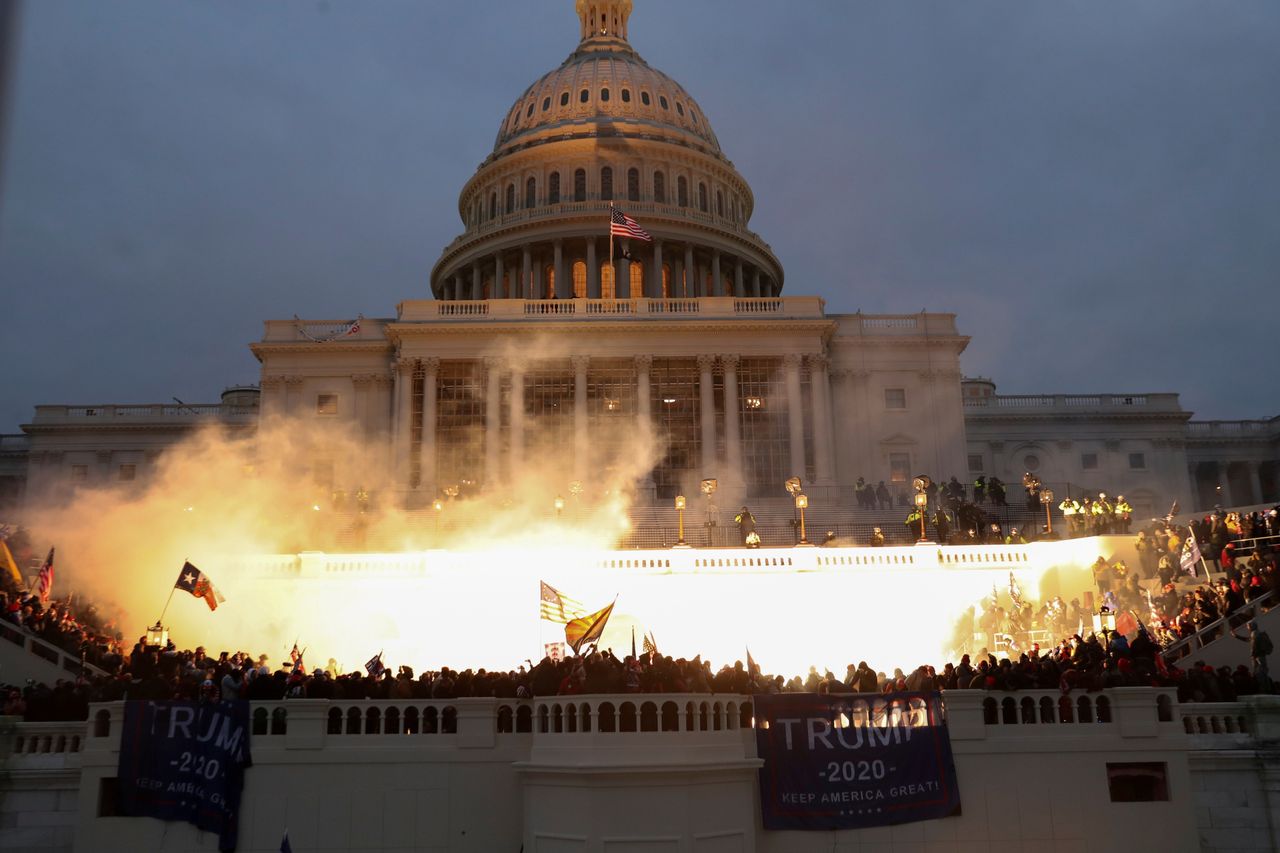 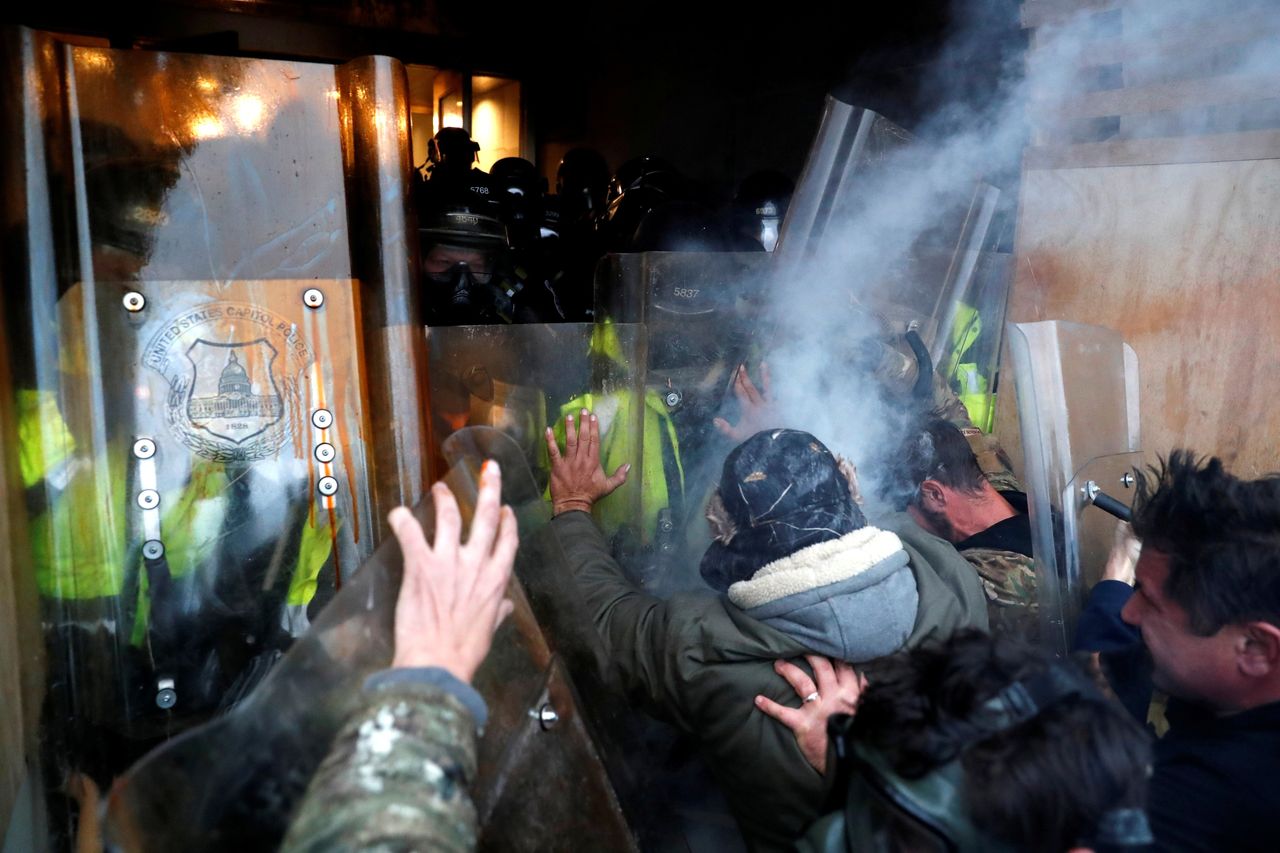 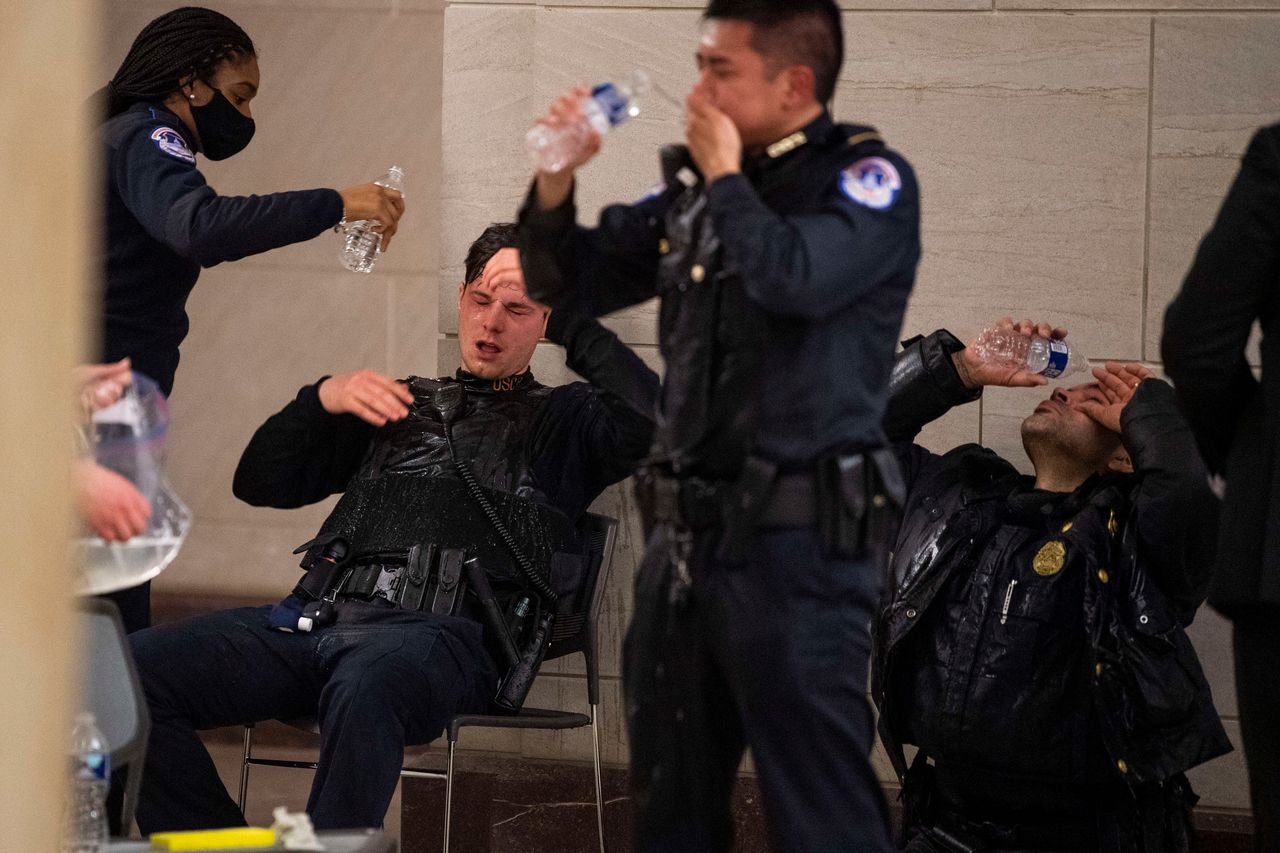 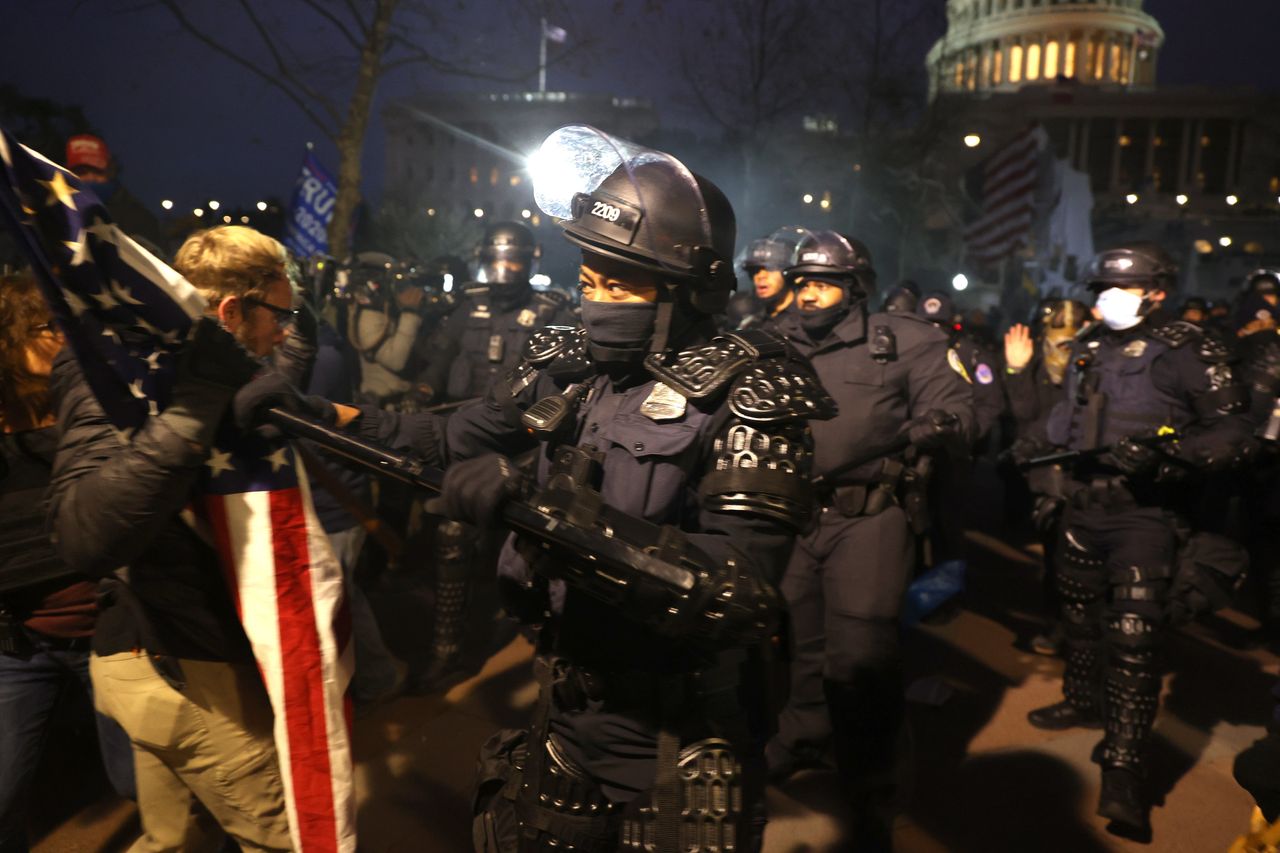 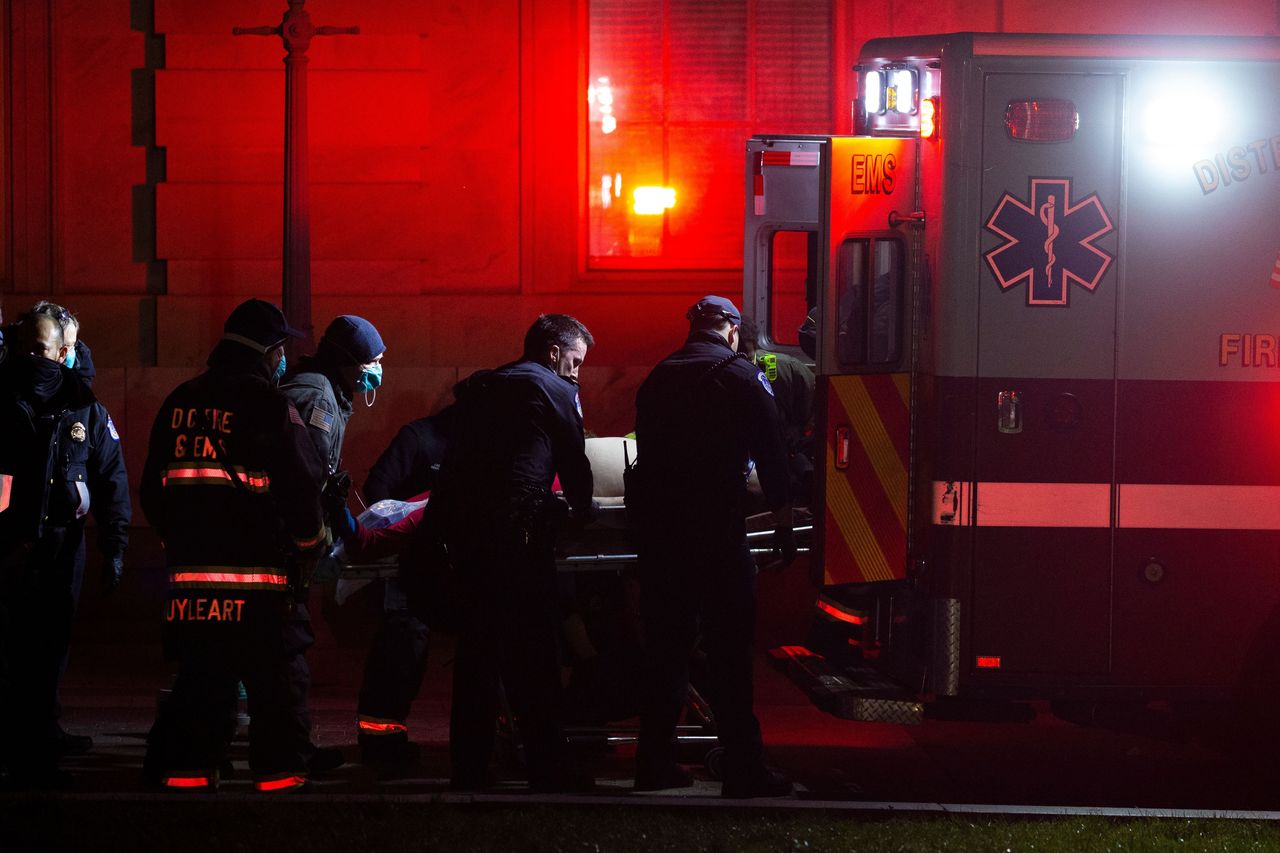 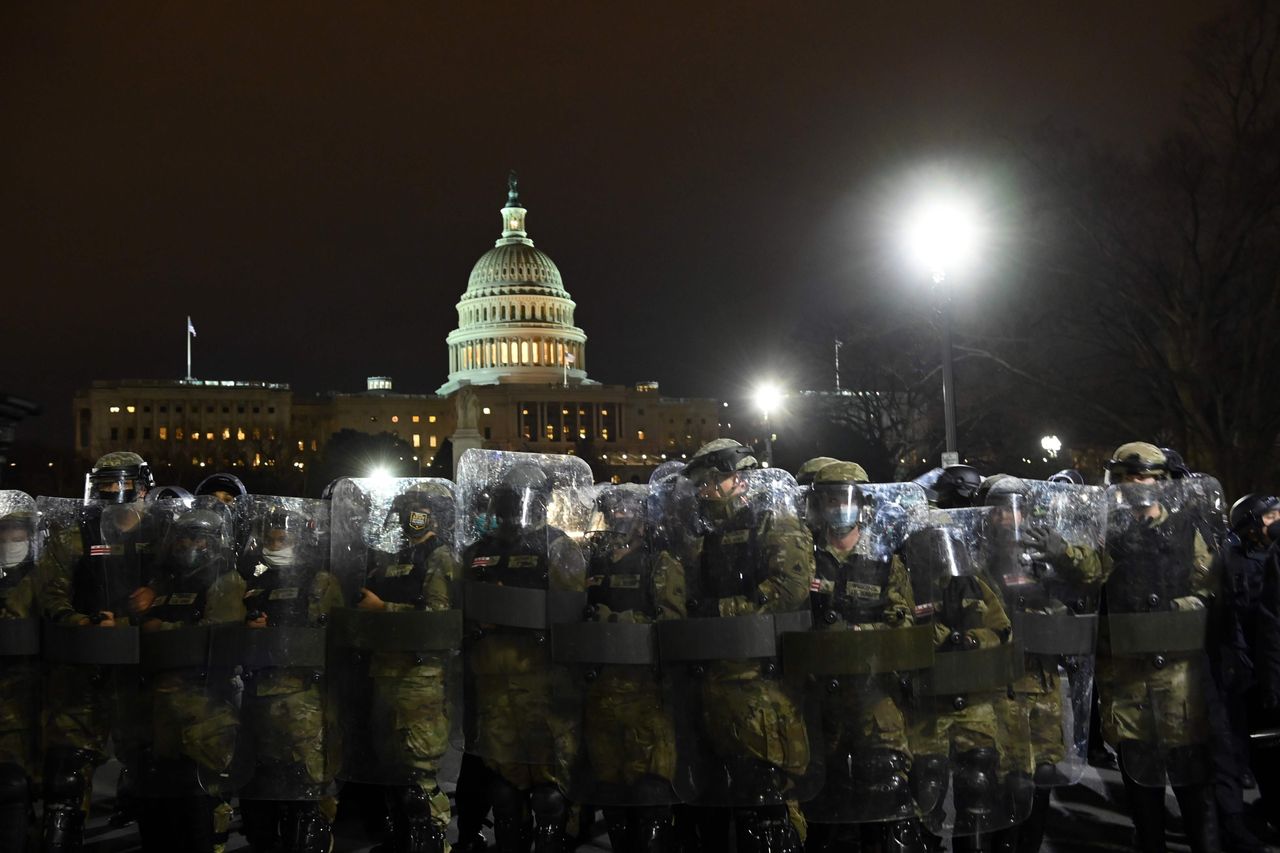 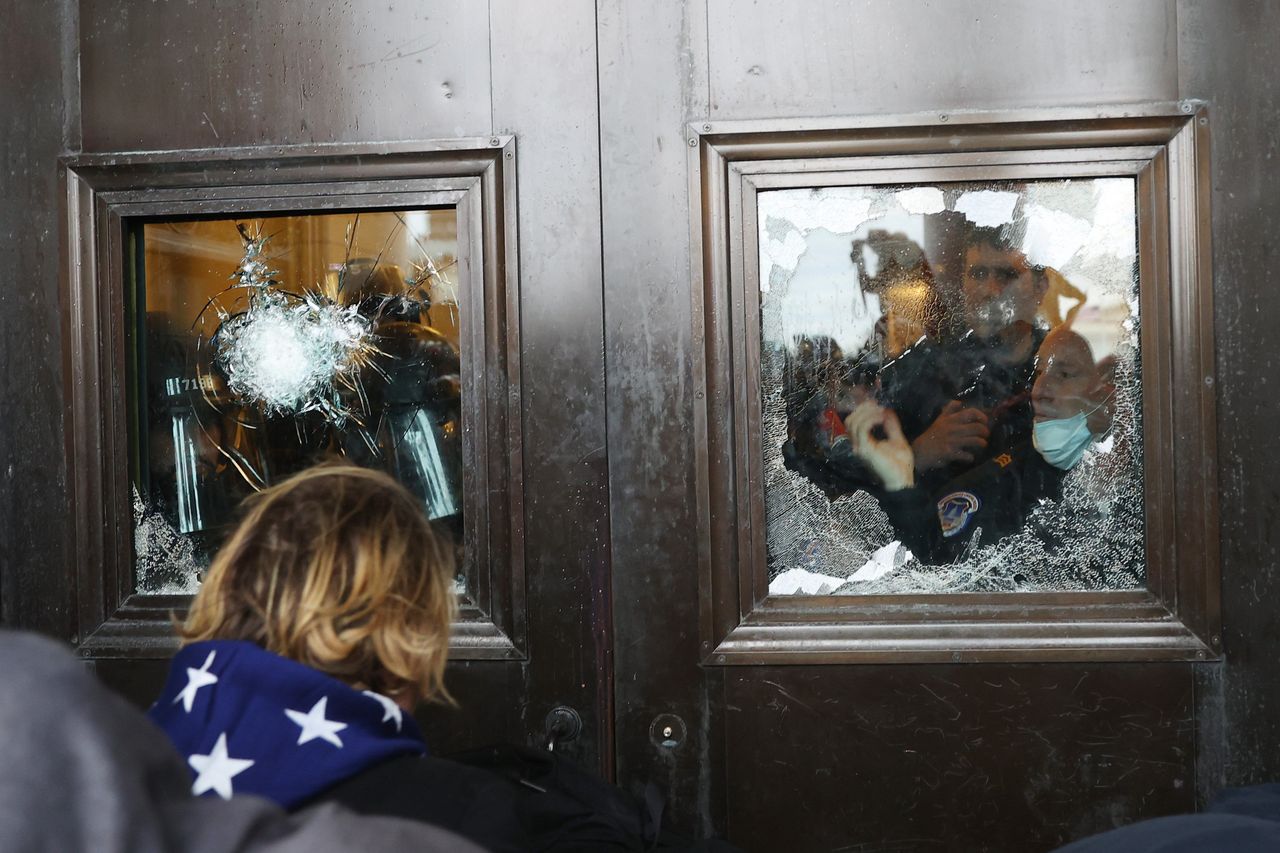 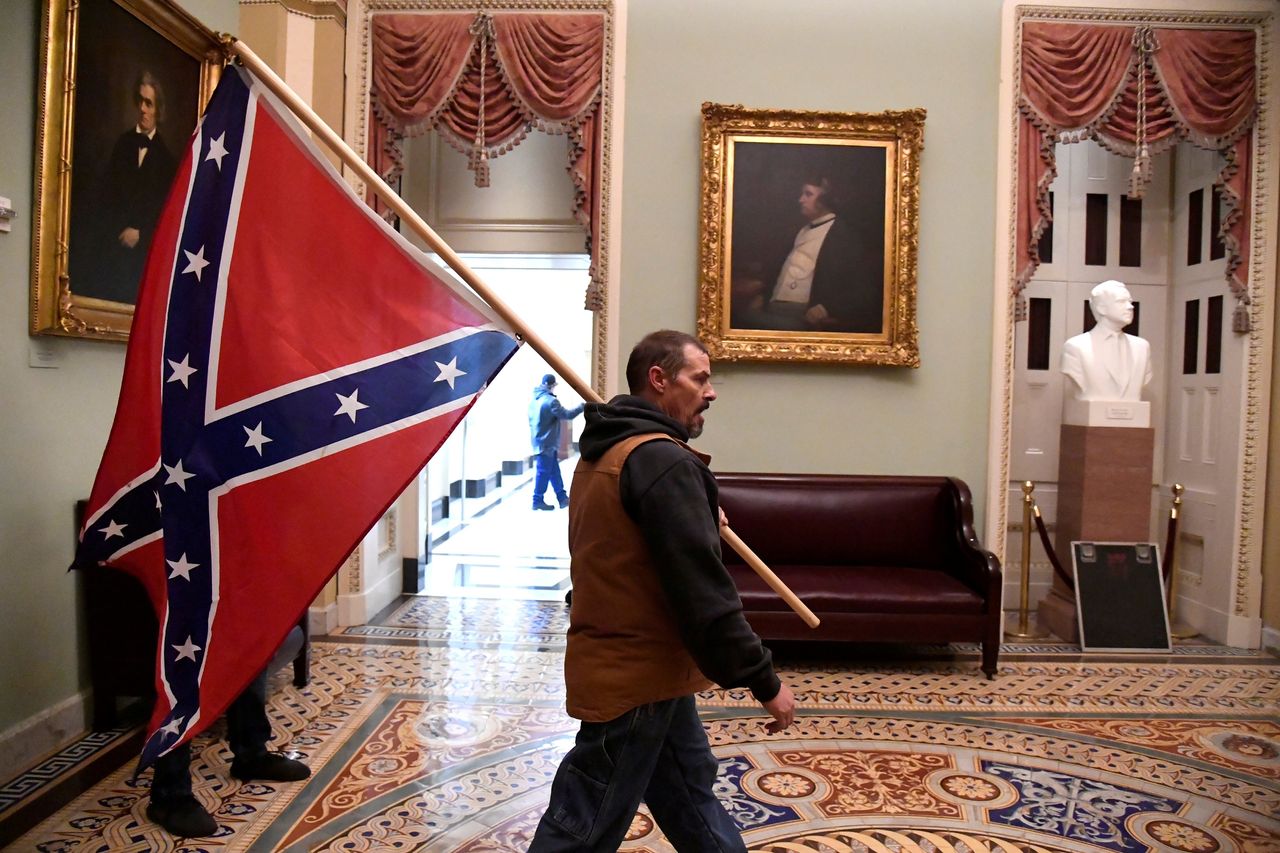 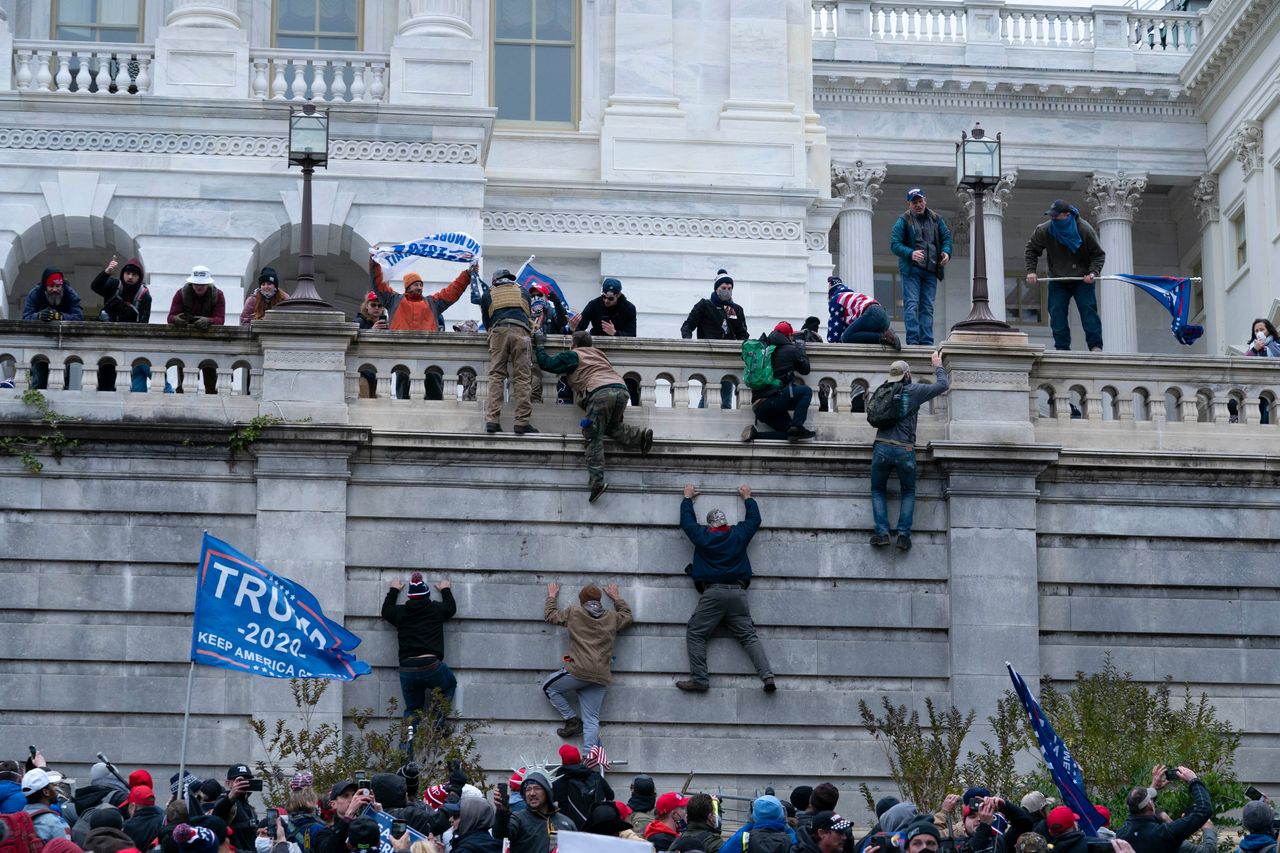 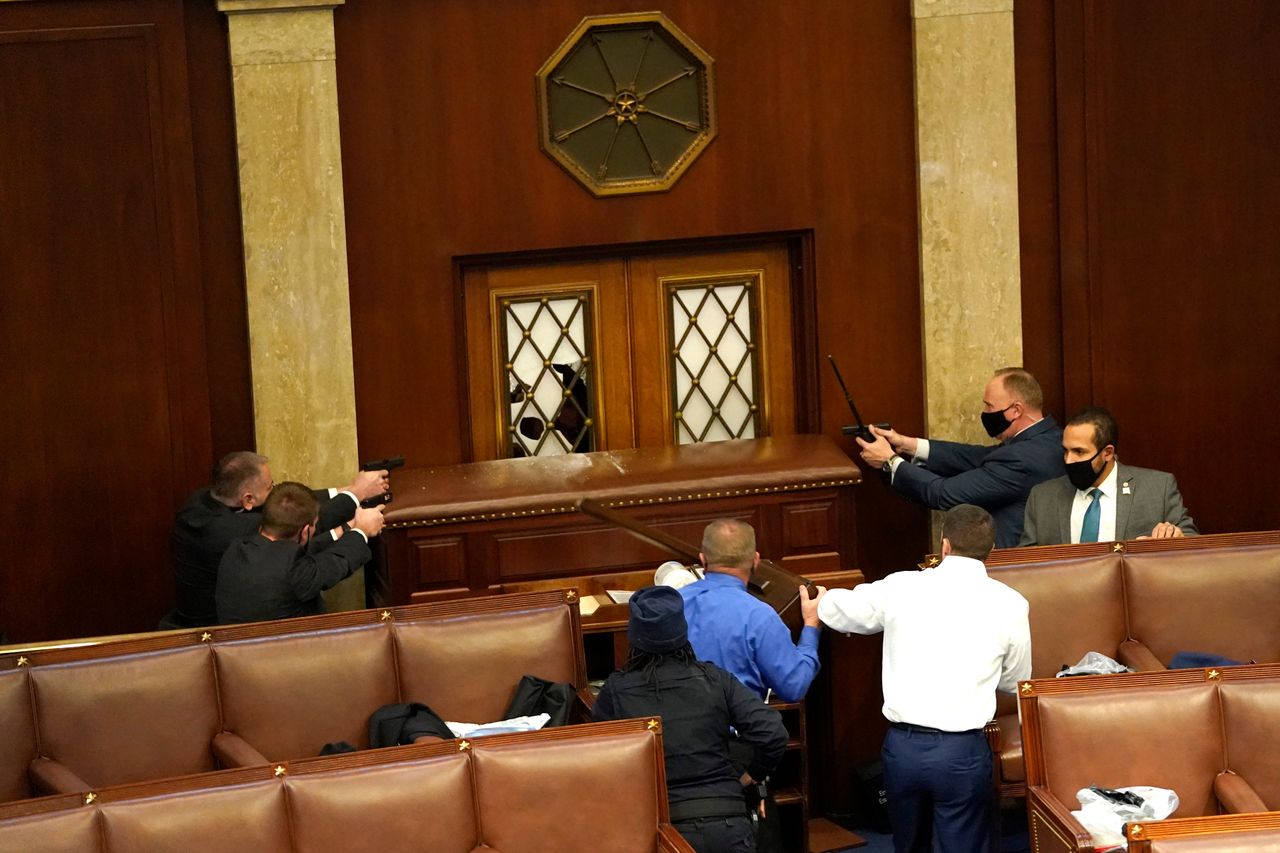 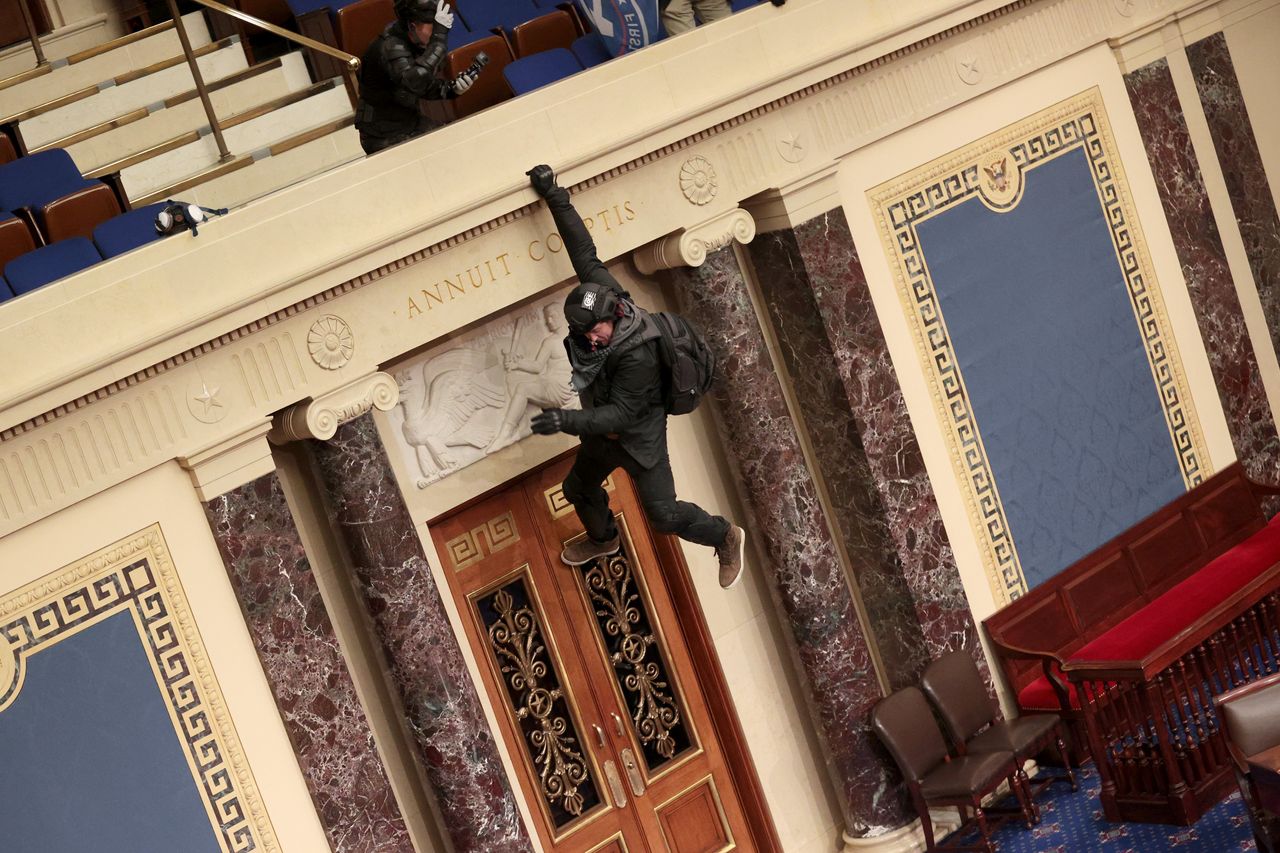 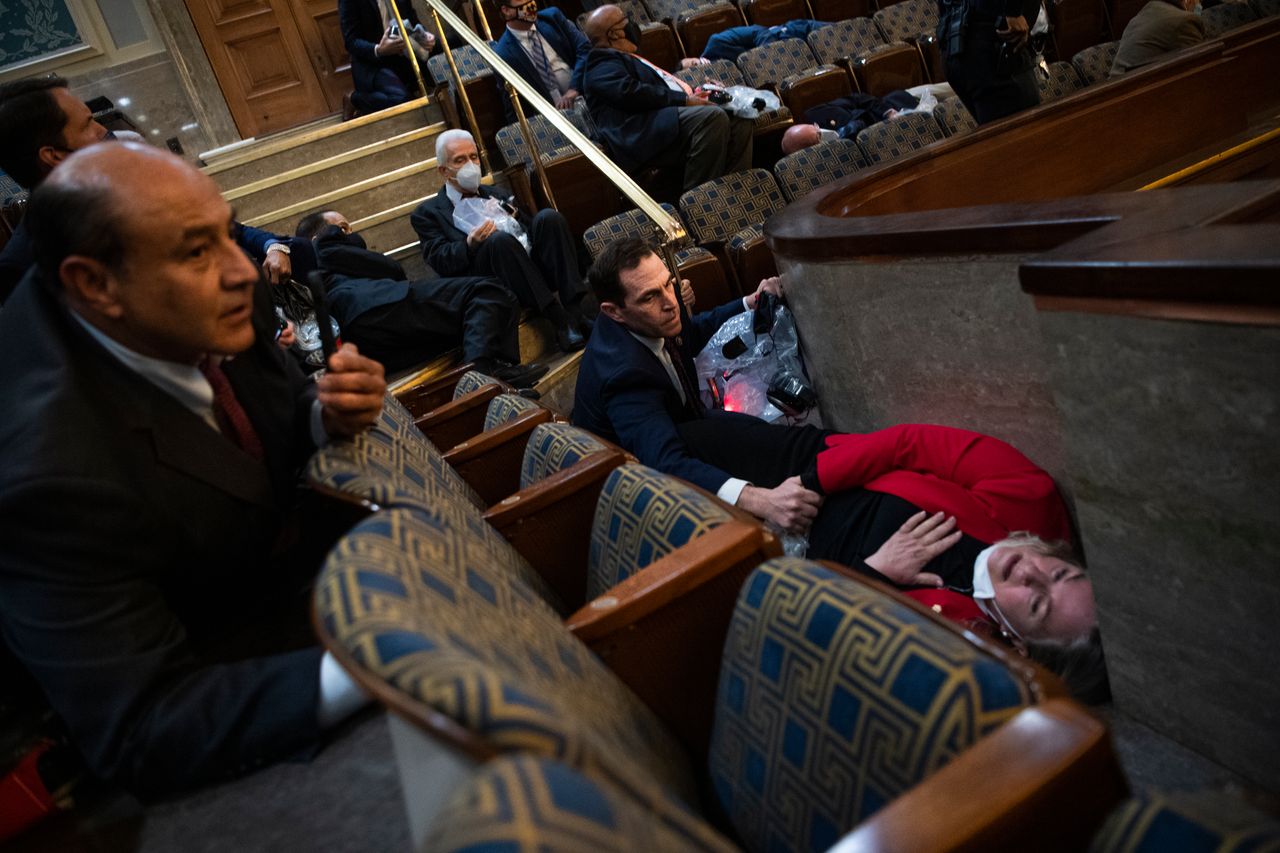 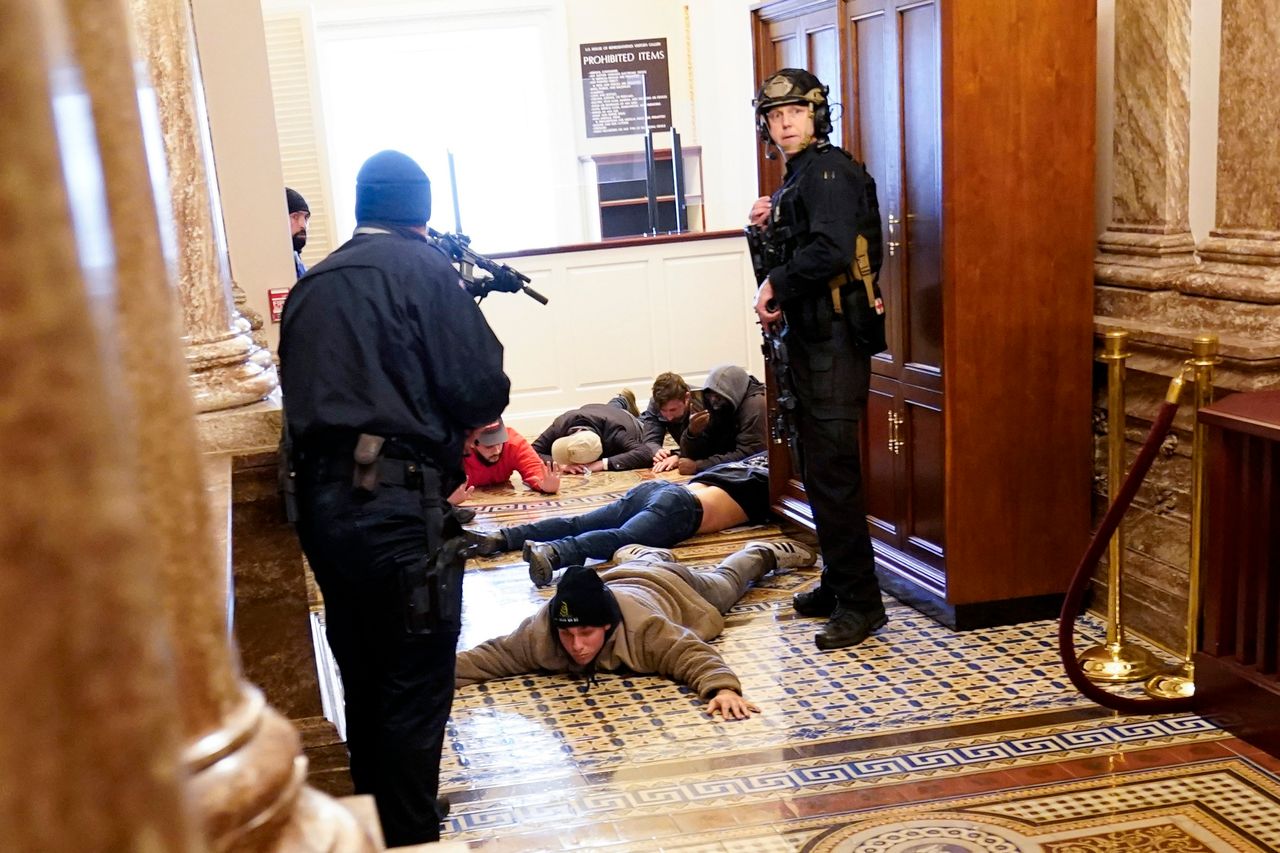 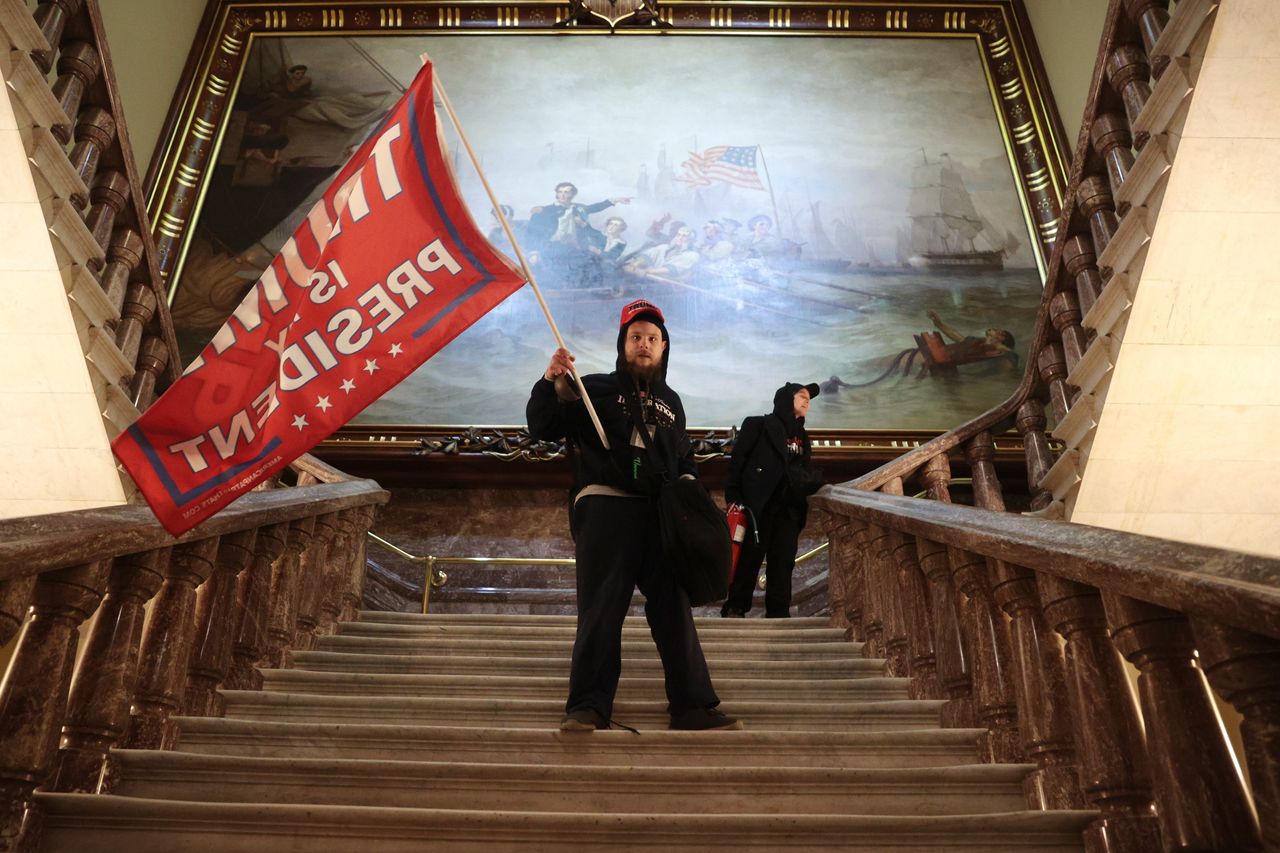 A congressional staffer held his hands up while a police Swat team checked everyone in the room as they secured the Capitol during a riot by Trump supporters Wednesday.
OLIVIER DOULIERY/AGENCE FRANCE-PRESSE/GETTY IMAGES
1 of 24
•••••

At 2:38 p.m., Mr. Trump tweeted: “Please support our Capitol Police and Law Enforcement. They are truly on the side of our Country. Stay peaceful!” The president was in the Oval Office as the protests escalated, according to a person familiar with the matter. The mood at the White House was tense as officials watched the breaching of the Capitol unfold on television. Some privately expressed horror at what they were seeing, aides said.

“This will be the president’s legacy,” said one White House staffer. “And any members, allies, staff are sickened.”

In the Capitol, staffers sheltered in place, locked in offices, watching the protests on TV. Some privately expressed anger toward the Capitol Police for not doing more to constrain the mob.

Rioters roamed the hallways and Rotunda carrying flags, including at least one Confederate battle flag, shouting.

In the House Chamber, the first sign that something was wrong was when Capitol Police whisked Mrs. Pelosi from the podium, where she was presiding. Confused lawmakers soon heard bangs from outside, unsure if they were gun shots or tear gas canisters. People scrambled to close the chamber doors.

“Verify every door is locked,” someone yelled. Rep. Dean Phillips (D., Minn.) shouted at Republicans, “This is because of you!”

Capitol Police told lawmakers they may need to duck under their chairs or hide in the cloakrooms. At the barricaded entrance to the chamber, officers stood with guns drawn as the mob outside pounded on the doors, breaking glass. At about 2:45, people inside the House could hear gunfire.

Rep. Pete Aguilar (D., Calif.) told himself to keep his head on a swivel. “I sent a message to my family and I’m just doing what every member was doing, which was just trying to prepare for what was ahead,” Mr. Aguilar said.

Getting out safely proved chaotic, he said. “We were down in the basement and navigated the tunnels, and there was confusion as to where they wanted us,” Mr. Aguilar said. “A handful of us went to the cafeteria, which was locked down, and they let us in.”

The mob inflicted damage across the complex, exploring offices and roaming the halls. There were broken windows on the House side of the Capitol. One man said rioters put MAGA hats on statues in the Capitol.

“I never thought they’d be scared of us,” said one man who stormed the building. “But they’re scared of us today.”

Before the attack on the Capitol, Mr. Trump had addressed supporters in the Ellipse, taking the stage just before noon and saying: “We will never give up, we will never concede. You don’t concede when there is theft involved.” He repeatedly called on Mr. Pence to take action to reject the Electoral College results.

After his tweet asking rioters to support the Capitol Police, several people close to the president, including his former chief of staff and former communications director, urged him to issue a more forceful call for calm.

House Minority Leader Kevin McCarthy (R., Calif.) said he had called President Trump to give him a firsthand report of the violence in the Capitol and ask him to help calm down the rioters.

“I called him. I think we need to make a statement. Make sure that we can calm individuals down,” Mr. McCarthy said in a phone call to Fox News Wednesday.

In a video issued at 4:17 p.m., Mr. Trump urged supporters to go home, but continued to reject the election results, telling supporters: “So go home, we love you, you’re very special.”

He later tweeted: “These are the things and events that happen when a sacred landslide election victory is so unceremoniously & viciously stripped away from great patriots who have been badly & unfairly treated for so long. Go home with love & in peace. Remember this day forever!”

Sen. Roy Blunt (Mo.), a member of Senate Republican leadership, called the day’s events disgraceful and the most tragic of his decades on the Hill.

—Rebecca Ballhaus and Ted Mann contributed to this article.

Write to Lindsay Wise at lindsay.wise@wsj.com, Catherine Lucey at catherine.lucey@wsj.com and Andrew Restuccia at Andrew.Restuccia@wsj.com

Appeared in the January 7, 2021, print edition as ‘‘Protesters Are In the Building’.’