Emmanuel Macron has beaten his far-right rival Marine Le Pen in the second round of France’s presidential election. The incumbent became the first French leader to win reelection for 20 years with 58.5% of the vote. 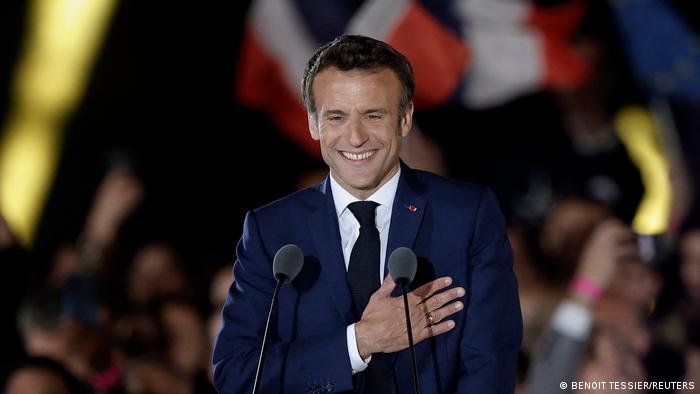 Macron, a pro-European liberal, marketed himself as a stabilizing force during a time of crisis

Macron won around 58.5% of the vote versus Le Pen on 41.5%, according to preliminary official results.

In doing so, he becomes the first French leader to win reelection in two decades since Jacques Chirac in 2002.

Shortly after his win, Macron told supporters at a rally in front of the Eiffel Tower in Paris that he would be a “president for all of us” and that his second term would “not be a continuation of my previous mandate.”

Sunday’s election runoff was a repeat of the clash between the two candidates in 2017 when Macron won 66% of the vote.

But this poll was marked by much uncertainty over whether supporters of far-left candidate Jean-Luc Melenchon — who came a strong third in the first round of voting two weeks ago — would switch their support to either of the two finalists, abstain or spoil their ballot.

How did Macron get reelected?

Macron, a pro-European liberal, marketed himself as a stabilizing force during a time of crisis, pointing to his leadership during the COVID-19 pandemic and Russia’s invasion of Ukraine.

This clearly resonated with voters, despite many people seeing him as being out of touch and elitist.

Ahead of the vote, Macron watered down plans to reform the country’s generous pension system in a bid to woo voters from the left.

Macron secured a second victory despite the ups and downs of his first term, including the so-called yellow-vest movement in 2018 that saw massive nationwide protests against his business-friendly policies and tax cuts for the wealthy.

A clue to his success came two weeks ago when Macron took a nearly 5-percentage-point lead over Le Pen in the first round when polls, ahead of the vote, had suggested the race would be tighter.

His second-round campaign was also bolstered by the backing of several French newspapers, with some warning that a Le Pen victory would make France an unreliable partner abroad and would disrupt national unity.

At a victory event in Paris, Macron acknowledged the sometimes bitter election battle against Le Pen and offered a message of unity to her supporters saying: “We now need to be respectful because we have had so many divisions and doubts.”

The president also promised his supporters to continue to “work for a fairer, equal society,” and said, “in order to do that we need to be demanding and ambitious.”

Le Pen, a far-right populist from the National Rally (RN) party, had threatened a major upset in French and European politics if she had been elected.

RN has historically been accused of espousing racist, anti-Semitic and anti-Islam policies. But in the months leading up to Sunday’s runoff, she sought to soften her party’s hardline image over immigration in a bid to woo more voters.

However, Le Pen did campaign to uphold a traditional French identity, while her promise to tackle the cost of living crisis also resonated with many voters.

Macron – winning over the hearts of reluctant voters

Many supporters would have welcomed her softer stance on the EU — no longer threatening to quit the bloc. However, her criticism of NATO at a time of Russia’s invasion of Ukraine may have driven some people away.

Fresh accusations that she and other party aides allegedly embezzled EU funds during her time as a member of the European Parliament may also have hit her trust with voters, although she has denied the allegations.

In a speech to her supporters in Paris, Le Pen said she had “no hard feelings” over the defeat. But she warned that Macron’s next term was likely to show as “much contempt and brutality” for the ordinary French voter as his previous term.

Hinting at her political future, the 53-year-old far-right politician said: “I’m going to continue to work for France and French citizens with the dedication that you know that I am capable of,” Le Pen said.

DW Correspondent Barbara Wesel, reporting from Le Pen’s campaign headquarters in Paris, said: “There is no natural successor, it really is a one-woman show. The party will need some time to figure out what comes next.”

Ukrainian President Volodymyr Zelenskyy, who has spoken with Macron several times since Russia’s invasion on February 24, congratulated his French counterpart and said he was a “true friend of Ukraine” on Twitter.

“I wish him further success for the sake of the (French) people. I appreciate his support and I am convinced that we are moving together towards new common victories,” Zelenskyy wrote in both Ukrainian and French.

“I sincerely wish you success in your state activities, as well as good health and well-being,” according to a statement from the Kremlin.

Will the West ever deal with Putin again?

President Xi Jinping of China said he would “like to continue working with President Macron to maintain diplomatic relations based on independence, mutual understanding, foresight and mutual benefit,” according to a readout from state broadcaster CCTV.

Indian Prime Minister Narendra Modi congratulated his “friend” on being reelected, adding, “I look forward to continue working together to deepen the India-France Strategic Partnership.”

“Your constituents also sent a strong commitment to Europe today. I am pleased that we will continue our good cooperation,” Scholz wrote on Twitter.

Dutch Prime Minister Mark Rutte also tweeted in French his hope to “continue our extensive and constructive cooperation in EU and NATO.”

UK Prime Minister Boris Johnson sent his congratulations, saying France is one of Britain’s “closest and most important allies.”

“I look forward to continuing to work together on the issues which matter most to our two countries and to the world,” he added.

Italian Prime Minister Mario Draghi described the win as “wonderful news for the whole of Europe.”

He wrote on Twitter that France was the US’s “oldest ally and a key partner in addressing global challenges.”

“I look forward to our continued close cooperation — including on supporting Ukraine, defending democracy, and countering climate change,” Biden said.

It’s a sentiment that was echoed by his Secretary of State Antony Blinken, who said the US was looking “forward to continuing close cooperation with France on global challenges.”