Anti-curfew riots in the Netherlands have continued for several evenings, with violence incited in various cities via social media networks. The ongoing unrest has shocked the usually peaceful country. 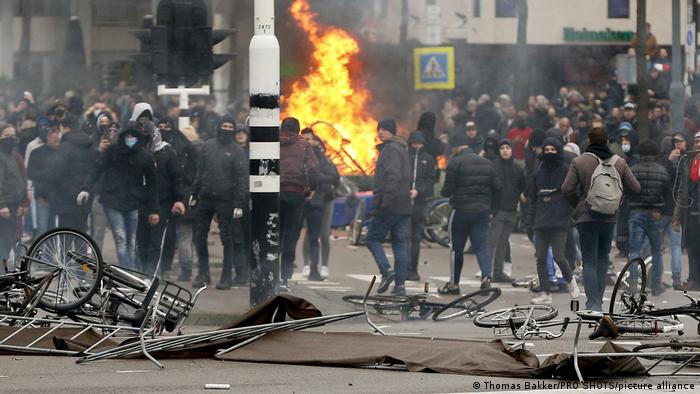 “Take as much fireworks, gasoline and everything else with you and let all your friends know that we are going to destroy this curfew!!!! Today our plan is to take the police down and to f*ck them!!!,” writes a user named Skkrr Mishtooo in the Telegram group RELLEN NEDERLAND 🇳🇱☠️.

The social media channel is used by anti-curfew rioters across the country and contains messages announcing where riots will take place that night, videos of burning cars and buildings, and a list of names and addresses of several Dutch ministers.

The protests started as a demonstration against a new curfew, from 9 p.m.-4.30 a.m. local time, which was introduced last Saturday to curb the spread of COVID-19. Cases and deaths appear to be slowly decreasing after a full lockdown was introduced on December 15 last year, but health officials believe that the even stricter measure was needed now due to the rapid spread of the UK variant and other new strains of the coronavirus.

It is the first curfew in the Netherlands since those during the Nazi occupation in the Second World War.

The protests have quickly turned violent. In various cities — including The Hague, Tilburg, Enschede, Venlo, Roermond, Amsterdam, Rotterdam and ‘s-Hertogenbosch — rioters clashed with the police, who used horses, dogs, water cannon and tear gas to control the situation. Protesters have thrown fireworks, looted supermarkets and destroyed shop windows. In Enschede, a hospital was attacked by rioters on Tuesday night, with attempts made to smash windows, and in Tilburg, a clothing store was destroyed by a firework bomb. Previously, in Urk — a small fishing town — young rioters set a government COVID-19 testing facility on fire. 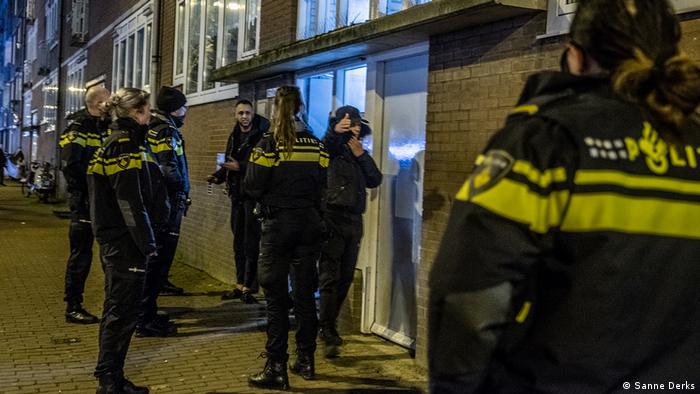 The police arrested 131 people across the Netherlands on Tuesday — mainly for public assault and incitement to violence via social media. Most of the arrests — in total, 81 — took place in the port city of Rotterdam.

However, whilst hospitals were attacked and illegal fireworks were thrown at police officers, the police concluded on Wednesday that overall, the fourth evening of anti-curfew protests was much quieter than the days before.

The level of violence has nonetheless shocked the normally peaceful nation. Citizens are afraid to leave their homes in the neighborhoods where clashes have been predicted, and anger against the protesters in general is high.

“I am concerned about the ferocity,” says Dianne van Gammeren, district chief of the police force in ‘s-Hertogenbosch, one of the cities in which riots took place on Tuesday. Protesters now carry knives and stun guns and throw bricks at the police, says van Gammeren. Her unit has arrested more than 50 people over the last few days. “Innocent civilians are the victims of their behavior,” she says.

The violence doesn’t have much to do with COVID-19 anymore, van Gammeren believes. “This is not about the right to demonstrate; these are criminal confrontations with people who are only looking for violence,” she says.

Messages in anti-curfew groups on Telegram and other social media platforms also show an anti-establishment attitude and general anger toward politicians, the police and journalists. In several of the messages on Telegram, protesters voiced anger against “those rich people who own their own houses.” 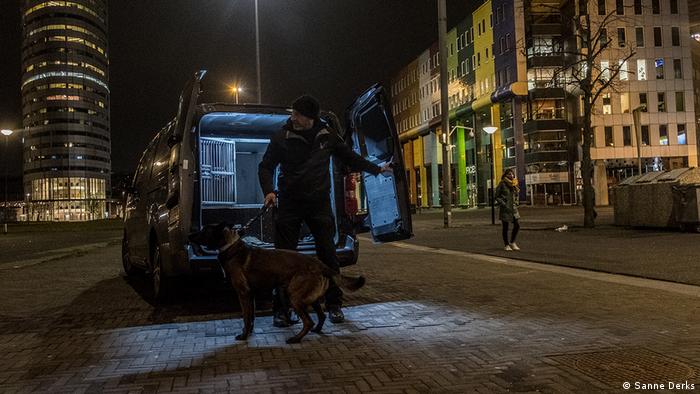 Dutch police have employed dogs in efforts to quell the riots

There were a number of civil society actors out and about in the streets of Dutch cities on Tuesday evening.

Tikho Ong, team leader from RADAR, a non-profit-organization fighting for a discrimination-free Dutch society, said that it was still unclear who the rioters were and what they were fighting for. “It is a very diverse group,” said Ong. “They do it for diverse reasons — partly because of a feeling of exclusion from society, but also maybe because they are simply bored … then it is maybe fun to fight with the police.” 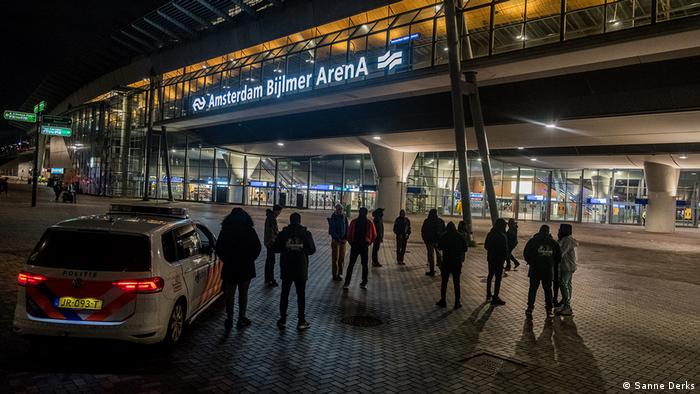 For Joanne, who was at the designated protest site in the Bijlmer neighborhood of Amsterdam on Tuesday as part of an unofficial neighborhood watch group, the protests are mainly about frustration. She can understand young people in her area, whom she is trying to help.

“It is consuming me completely. Yes, I am angry that the government has decided that I cannot go and have dinner with a friend after work because of the curfew. I understand their frustration, but I also want to prevent young people from wasting their future by being part of one violent night,” she said. 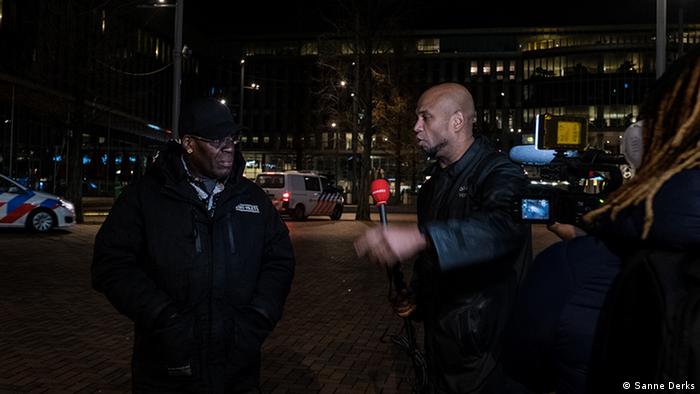 Police chief van Gammeren says that police are also relying on normal members of  society to help calm the situation down. In ‘s-Hertogenbosch, the police were aided by unusual collaborators — football supporters from FC Den Bosch, a group police often have to do with as hooligans during matches. The football fans decided to march the streets of the city to support the police, who gave them orange vests for identification. Van Gammeren praises the fact “that people stand up and say: Stay off our city!”

In Maastricht, more football supporters gathered to counter the riots. And in Amsterdam, anti-racism activist Kunta Rincho was out talking to police and groups of young people gathering in the station square in the Bijlmer neighbourhood shortly before the curfew was due to begin. A big anti-curfew protest was announced here, and social media predicted the looting of a large nearby electronics store, MediaMarkt. 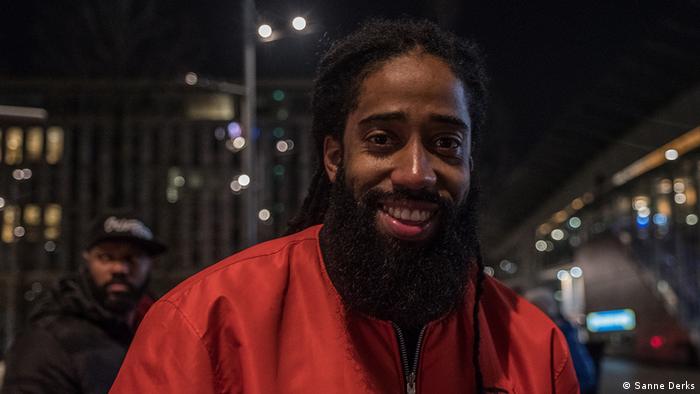 Rincho and his friends are part of a neighborhood initiative that hopes to prevent violence. They don’t have an official affiliation but know all the youth in the area: “We encourage them not to do something that they don’t want to be involved in,” Rincho says: “Whereas the police is repressive, we are preventive.” The Bijlmer area in Amsterdam ended up remaining calm on Tuesday.

And other groups are trying to make good the damage done during the protests.

In Urk, where the COVID-19 testing center was set on fire, young residents started a crowdfunding campaign to raise money for the reconstruction. The group hoped to raise €10,000 ($12,108), which they said will not be enough to carry all the financial costs caused by those who started the fire but would show “the good side of Urk’s youth.” At the time of writing, they had nearly reached their goal, raising €9,600.

Another group raised €100,000 to rebuild the destroyed shop of a shopkeeper in Den Bosch.

And if all else fails, the police are there to try to deter any further violence. “We are ready to continue to protect,” says police chief van Gammeren from ‘s-Hertogenbosch.

Netherlands sees another night of violence